In January, Starbucks introduced a new seasonal beverage that is quickly shaping up to become a favorite. The cinnamon shortbread latte – sometimes dubbed the “CSL” – comes hot, iced, or as a frappuccino, and it’s a blend of indulgent winter flavors. The typical espresso and steamed milk are combined with scrumptious brown butter, cinnamon, and vanilla, all topped off with a coat of cinnamon and nutmeg powder. As an avid coffee fan, I was instantly intrigued by the flavor profile, which seemed perfect for the winter months. And with the luck I’ve had trying other seasonal “cold weather” Starbucks drinks, like their toasted graham and molten chocolate lattes, I had a good feeling about the CSL.

Naturally, I had to try one ASAP. The day I ordered my CSL I was bundled up in layers, so a refreshing iced latte seemed like the perfect choice. While it lacked the pillowy foamed topping of its hot counterpart, the flavor was definitely still there. While in my opinion some Starbucks drinks taste better hot than iced (like the pumpkin spiced latte), the cinnamon shortbread latte still tasted delicious. I could pick up on the buttery, cinnamon-y tones in the drink, and the ice did not dilute the flavor. In some ways it was like the best of both worlds, being able to enjoy the rich taste while still having a refreshing iced beverage. 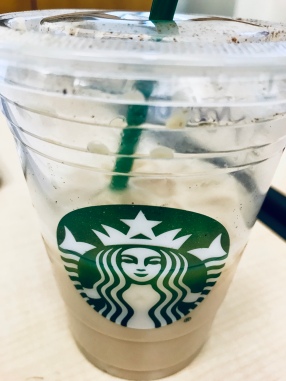 I picked up my CSL shortly before class, where I continued to enjoy it throughout the day. As time passed, the ice started melting and subsequently watered down the drink. This did affect the flavor, but I had mostly finished the latte by this time so it wasn’t much of a problem. Melting ice is an issue for all iced drinks, though, so this didn’t change my perception. My only other note is that because I chose an iced latte, the nutmeg and cinnamon powder mostly coated the top of the ice cubes instead of sinking into the drink. I’m sure this could easily be resolved by ordering the drink hot, or by giving it a stir.

All in all, I was impressed by the cinnamon shortbread latte. The drink’s flavor profile is indulgent but not too sweet or spicy, and can be enjoyed iced or hot. If you do order it iced, just make sure to finish it before the ice melts to maximize the flavor. Additionally, try pushing down the ice with your straw and stirring to mix in more of the powder topping. With that, best of luck CSL hunting and enjoy!