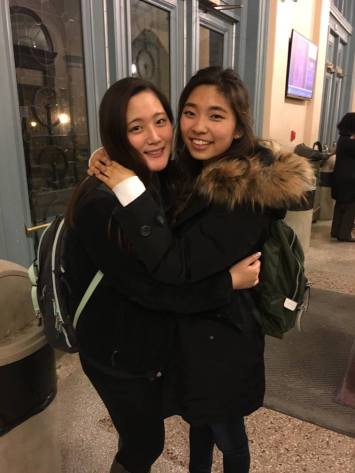 My roommate of three years. Time has surely flown by, looking at where we are now… just days away from graduation.

Our relationship as roomies quickly became one of my most valuable friendships. During freshman year at FAR, I remember saying hello to each other time to time when we were with mutual friends, but then one day, you and I both decided we wanted to move to the Six Pack dorms. I had found a room at Nugent, and I heard you had one, too, but we both didn’t have roommates. Do you remember that day we walked to the Ike for a friend’s birthday surprise and ended up talking about our rooming situation? I asked if we should just room together and take the L-Room (the largest rooms at Nugent) I had on hold. Thank God we agreed on that suggestion, because from then on we became inseparable.

Our first year of being roommates during sophomore year, we spent so much time together. We chatted for hours on end, danced and sang in our rooms, and learned to share our love for Chobani yogurt and fruit, especially bananas, peaches, and grapes. I remember we even FaceTimed when I left for winter break first (awww). Anyways, we had so much time during sophomore year, which also meant less stress and more adventures for Sarah and Jane.

Then, rewinding back to junior year, we unfortunately had to move out of our lovely Nugent room because our floor was being established as a Living Learning Community. After searching for an empty room, we simply decided to move next door to Wassaja Hall. We thought it would be okay since it was a brand new dorm, but we were so wrong. That year was rough for us… we became SO busy with our own academic and work schedules that it became hard for us to spend time together. At the end of the day, we simply wanted to wind down by ourselves and not really talk.

The atmosphere was more dim and dull, but we still had some fun memories too. I remember you and I personally went through our own struggles that year, and we both decided not to share with each other until junior year was done. I wish we could have both been there for each other more, despite our stressful moments. Yet, I’m so thankful knowing that you and I both cared for each other and gave each other enough space to find joy in what we wanted to study and pursue in our careers.

Now we are finally seniors and we’re living at Capstone, which was our dream plan since sophomore year. We talked about wanting to move there since the beginning of our roommate journey, and we did it! We also have our lovely third roomie, Kristina, who has been so awesome to have around. Kristina was my first friend at the U of I, and I’m so blessed to have spent my senior year with you both. Both of you mean a lot to the memories I’ve collected here on campus. Again, with time and age we only seem to get busier; it’s hard for us three to all grab a meal or go on study dates together. Still, we make an effort and try to make time for each other, which is what matters.

I think it was fate that you and I both ventured into the Ike one day and decided to room together. I can’t believe that my cousin dated your brother (LOL) and that she had separately mentioned you and I would be really great friends if we met. She called it from the start! We spent these past three years at U of I together, which means a total of six semesters… that’s a long time, but the time has surely flown by. Now, our time as roommates is slowly coming to a close, but I just want to say that you are one of the biggest blessings in my life. Thank you for your kind, considerate, motherly heart and for looking after me. Thank you for the countless hours you heard me complain or talk in multiple accents (or tried, haha), and thanks for being the respectable, hardworking, strong woman that you are!

I know our time as roomies may be concluding soon, but our friendship and sisterhood will continue beyond. You have just one more year left on campus, but I know you will have a wonderful time pursuing your education degree. You will be an amazing teacher, the best that anyone could ever want.  I’m so blessed to call you my dearest friend, and I can’t wait to see you teach in the near future.

Featured image is from VideoBlocks. All other images were taken by the author.