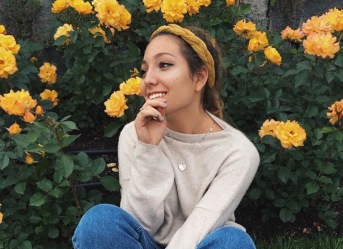 Estefania Loret De Mola, known by her friends as Stefy, is a rising star in the art scene. As a freshman majoring in Graphic Design at UIUC, she has already won several art contests and is the model of a young woman relentlessly pursuing her dreams. Her love of art began when she was a child— given sketchbooks by her mom (who is also an artist) and toted around museums, Stefy’s family sparked her initial love for art that has now grown into a full blaze.

“They want me to succeed, whether that’s doing freelance or working for a magazine,” she said, “and even when I lost my way for a little while, they stayed really supportive of me.”

Being an art a major isn’t easy, however, even with family support behind her. A typical day for Stefy starts early in the morning, attending classes like drawing, art history and economics, and then spending hours in the studio doing photography or working behind a computer on graphics late into the night. Her work doesn’t end when classes do, which makes for a tricky work-life balance, but since her work is her passion it feels easy.

She has worked with sculpture, oil painting, watercolor, and pen drawings, but her favorites are watercolor and pen together.

“The digital stuff is really nice too, because it’s more current.” Stefy added. Her classes push her to work with new mediums, including a palimpsest she recently finished:

This is Rosie is a palimpsest drenched in pink hues — a surprising contrast from other charcoal animations, which are usually done in black and white. For Stefy, taking a traditional idea and turning it on its head is her favorite thing to do with an assignment: marinating her unique artistic style with what is typically expected and leaving her audience stunned.

The assignment they were given began with essays they had to write in order to set up the story.  “I had this completely different idea than what I ended up with,” Stefy said, “and the only thing that stayed the same was that I wanted an unreliable narrator inspired by Fight Club.” When asked about the meaning behind the animation, she admitted that she likes letting the audience take what they need from her work rather than revealing what it means to her.

Whatever her method is, it appears to be working. Stefy recently won the Illinois Times Magazine cover contest and her artwork will be used on their brochures and other material for the whole year.

“Every time I win a contest, it’s honestly a game changer. It makes you feel so much better about your art and inspires you to work harder.” she admitted, adding that the publicity her work will get from winning contests is the strongest motivation to keep pushing herself forward. 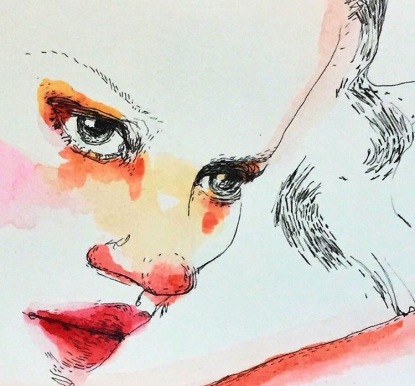 Besides catapulting through the local art scene, her inspiration to create comes from Christopher Nolan movies (specifically the movie Memento), political movements and the other artists she follows on Instagram. Scrolling through her feed, she lists Negative Feedback, Pollynor and i-D Magazine as her favorite accounts to check when she’s feeling creatively blocked. As for her personal Instagram account, her favorite picture is a simple snapshot from her last trip to Portugal. Walking down the street with her sister and suddenly drawn to all the yellow around her, she took out her camera and snapped a photo.

“I was having a good ass day in a beautiful city and in that moment I was so happy. It was really spontaneous and I love that,” she said.

After graduation, Stefy dreams of moving to New York and doing part-time freelance and graphic design for a magazine. Later on, she would love to start her own publication with her sister, inspired by culture, music, fashion and art.

“Fashion and music have a big impact on my work,” she said. “I want to do so many things and I know I have a limited amount of time to do them, so I have a hard time narrowing my focus.”

For now, she’s going to build her portfolio and keep working toward her dreams. With her hard work and natural talent, there’s no doubt she will achieve them.

Where you can find Stefy: