Nowadays, anything you say or do seems to offend at least one person. It has gotten to the point where the design of a cup (or lack of) can ignite the flame of anger within people. Who can blame them? Every holiday season, Starbucks would introduce their holiday cups decked out with Christmas motifs without fail, conditioning people to look forward to next year’s design. But is it rational to lose your cool over holiday cups? And should it even be called a controversy?

The holiday season of 2015 marked the beginning of this so-called “controversy.” Starbucks made the bold move of releasing their holiday cups stripped of Christmas designs and opting for a plain red cup. People on the Internet went crazy. Social media feeds exploded with enraged customers complaining that Starbucks was trying to take away the Christmas spirit. Some even went to the extreme, exclaiming how the switch to a plain red cup made Starbucks anti-Christian. Starbucks’ reason for the plain cup was to promote inclusivity, allowing customers themselves to customize the cups.

Fast forward to November 2016 and Starbucks has released its green cup to celebrate community. The artist, Shogo Ota, designed a hand-drawn mosaic of baristas, customers and partners to represent the Starbucks community. People felt personally attacked by the design, with a majority assuming it was for the holiday season. Since the cup is green and the color green is synonymous with Christmas, this was a pretty reasonable assumption. Customers once again took to social media to express their displeasure, joking about the lack of festivity as they sipped from their green cups. Others questioned how the Christmas spirit became part of the political agenda. Only when Starbucks released their holiday red cups decked with Christmas motifs were people satisfied. 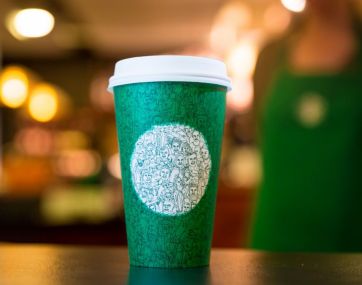 Should this be considered a controversy? Ask yourself what the purpose of a Starbucks cup is. The answer is obvious: To hold piping hot coffee and to caffeinate the coffee drinker. So why are people losing their cool over something so trivial?

At the end of the day, who cares if your holiday cup is or isn’t decked out with Christmas motifs this season? The most important thing is that the cup still functions as a cup.