“We know where we are! We know who we are!” sing the Pacific Island navigators of Moana in “We Know The Way” as their boats sail through a brilliant, sapphire ocean. After hearing this powerful declaration, viewers will have the Samoan cry of “aue aue” ringing in their souls for weeks. The fiery catchiness of the tune captures the film’s spirit in a heartbeat.

Walt Disney Animation Studios’ Moana is a beautifully animated narrative of self-discovery that focuses on two senses of identity: where we are from and where we are headed. Moana of Motunui (voiced by Auli’i Cravalho) is the daughter of Chief Tui (Temuera Morrison) and will one day inherit his position but yearns to leave their island and explore beyond the reef. Chief Tui is overprotective and wishes for Moana to remain on land, but when an ecological disaster consumes their island, his daughter takes the initiative. She sets sail on a small canoe past the shores with a magical crystal that can restore balance to their world. 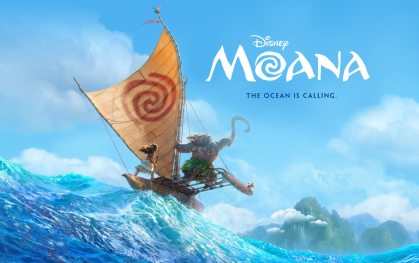 It’s admirable and important to note the lack of handsome princes within the film. Instead of a charming and chivalrous young man ready to sweep her off her feet, Moana partners with Maui (Dwayne Johnson), a burly, egotistical Polynesian demigod who wields a magical fishhook that enables him to shapeshift. Throughout their quest to save the world, Moana banters with Maui like a sibling rival and never once views him as a potential love interest. She is led by the sheer will to protect her people from the impending doom and restore her island. Moana is also encouraged by her Gramma Tala (Rachel House) who shares the same passion for the ocean. Devoted and determined, Moana has no need for a prince.

As another addition to the Disney Villains family, Moana introduces viewers to Tamatoa (Jemaine Clement), a giant self-absorbed coconut crab from Lalotai, the realm of monsters. He arrogantly flaunts what he believes to be his most beautiful qualities, particularly his shell that is covered with golden treasures and artifacts. This is exemplified in his signature song “Shiny” where he glorifies his own beauty. His unpredictability and quirky yet wicked sense of humor is unforgettable.

Moana is a fun-filled adventure that takes audiences on an empowering voyage through uncharted waters in order to help children discover who they truly are. The animation of the lush Pacific Islands coupled with bringing Maui’s tattoos to life an inky comic strip is done remarkably well. As an avid Disney fan, this film is definitely worth watching with family and friends. 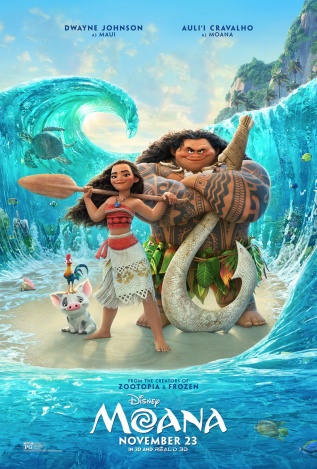