A gust of chilly wind blows across the empty Marketplace Mall parking lot. Well, almost empty parking lot. Tents, tables, and the Color Run signs replaced cars in the parking lot. It is 6:00 a.m. in the morning, the temperature is as low as the thirties, and a line of shivering volunteers eagerly wait their turn at the volunteer tent. Once volunteers arrived at the tent, there is a sign in sheet. After volunteers sign in, they get a Color Run t-shirt of their choice on top of getting assigned to a job. The available jobs were directing traffic, passing out water, throwing color at color zones, and clean up after the race. I chose a yellow Color Run T-shirt and unfortunately got assigned to directing traffic since I wanted to throw color at runners instead.

A lot of people talk about their experiences running in races but people rarely talk about the volunteering side. It is not easy to volunteer for races. Volunteers must be committed and responsible. That means waking up early in the morning, which is especially hard for college students on a weekend morning. Saturdays and Sundays are usually reserved for sleeping in and recovering from the week of staying up late doing homework. 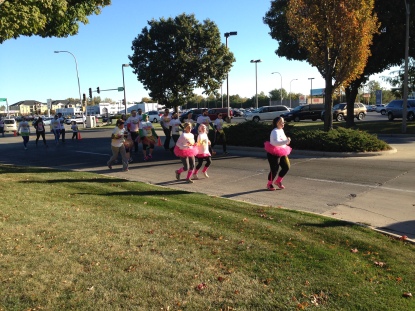 Despite the low temperatures in Champaign on October 17, 2015, around 2,000 people participated in the Color Run. People of all ages were either running or walking. The chilly weather did not stop the participants from enjoying the colorful course ahead of them. On that chilly day, I was placed towards the beginning of the race course directing traffic and making sure runners follow the course. There were many college students and adults but there were also little kids and a couple of high schoolers. They passed my station with the colors yellow and orange on the them. A big part of races are people dressing up. Many runners wore tutus even though it wasn’t a requirement. Most of the people that passed by the station wore smiles on their faces. Some people were especially excited about the bubble machine located at the water station up ahead.

With only around 2,000 participants, the race ended before its predicted time which is around 11:00 a.m. After clearing our station, instead of walking back to the finish line, volunteers directing traffic near my station received a ride from a policeman. We arrived at the finish line in style with glitter greeting us as we got out of the car. The Finish Festival was done and runners were getting ready to leave. The clean up crew were already cleaning up the site. All in all, despite the chilly weather, volunteering at the Color Run was fun. It feels good to sacrifice one Saturday of sleeping in to help out at an event about healthiness and happiness.

Until next year, Color Run.

All photos courtesy of Ada Li