For those of you who get squeamish at the sight of fake blood and can’t even make it halfway through a haunted house, Halloween can be a difficult time. Horror movies are a cultural staple of this holiday, and it might make you feel like you’re missing out on some of the fun if you have to spend the rest of your Netflix movie marathons covering your eyes. It’s okay though, because there is one genre that’s an exception to horror movies that your friends will still want to watch: Disney Channel Original (Halloween-themed!) Movies. Here’s a list of five great DCOM Halloween specials that will make your friends nostalgic enough to skip the Saw movie marathon.

They’re twins! And witches! It’s actually kind of surprising that no one else came up with this gimmick before. Plus Tia and Tamera are the main characters so you know it’s going to be funny. This movie introduced the whole hand motion for “whatever loser” (see picture above), which immediately became the coolest way to insult your fellow pre-teen friends. Note: Camp Rock totally stole this hand gesture and added the word “major” to it. Twitches is the original one who did this so don’t let anyone tell you otherwise. Beyond that, the villain in this movie was kind of terrifying for a DCOM. The ominous “darkness” that follows the girls around is really freaky! The bad CGI backgrounds made the movie more funny than annoying.

4) Phantom of the Megaplex 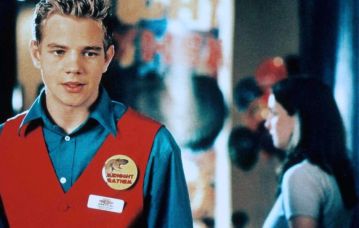 Disney’s version of the Phantom of the Opera but minus the creepy love story that’s kind of like a kidnapping! Actually, there is a kidnapping in Phantom of the Megaplex, but in this case the kids escape and end up catching the villain. This one really needs to get popular again, especially when one of the main characters jokes about “The Werewolf of the Megaplex” at the end of the film. For some reason Disney has yet to capitalize on that amazing sequel opportunity.

3) Mom’s Got a Date With a Vampire

If you ever feel bad about your own dating prospects, just remember that you never actually went on an accidental date with a vampire. The movie director made some great casting choices. The dad from The Nanny plays the titular vampire while the dad from Lizzie Maguire plays the vampire hunter—who just so happens to be named Van Helsing. Craig from Degrassi is in it too. For old school Nickelodeon fans out there, check it out to see what he was like before he moved to Canada. 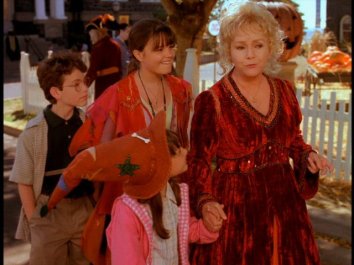 Even though they tried to replace Marnie with Sara Paxton in Return to Halloweentown and thought no one would notice, this series is still amazing. In the first movie, Marnie and her siblings have to stop an evil spirit that’s trapping the citizens of Halloweentown in an abandoned theater. The second one is pretty similar; Marnie has to save Halloweentown from an evil spirit that’s making the citizens of Halloweentown totally normal instead of their regular, creepy selves. But the third one is absolutely incredible. Marnie decides to bring a bunch of Halloweentown teens—a group of werewolves, vampires, and trolls—to high school with her. It’s like every high school movie ever, but with actual monsters trying to fit in. It’s as great as it sounds. 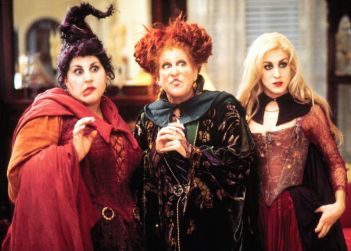 Technically, Hocus Pocus is just a Disney movie and not a Disney Channel Original, but can anything else besides Hocus Pocus take the number one spot? It airs on Disney Channel at least twice every Halloween, which is probably more airtime than a few others on this list get. Hocus Pocus is really the Halloween movie that has it all: creepy witches trying to murder children, an undead spirit trapped in the body of a cat, and 90’s tie-dye t-shirts. The Sanderson sisters are as funny as they are scary. Plus, it’s directed by the guy who did High School Musical, so the one musical number—“I Put a Spell on You”—is amazing.