Throughout sports history, African-American professional athletes have commonly used their profession as a platform to address important issues within the Black community. One of the greatest examples of this happened during the 1968 Olympics when Tommie Smith and John Carlos raised their hands to show their support of the Black Power movement. Professional Black athletes such as Muhammad Ali, Jim Brown, and many others were also well known for voicing their informed opinions on race issues and openly showing their support for Black movements.

Fast forward almost five decades later and the world now views professional Black athletes as some of the most influential people, but they have seemingly withdrawn that influence when the topic of race issues is up for discussion. Racial issues in the Black community and their relationship with the professional Black athletes had become more distant over time, almost to the point of being nonexistent. However, this relationship has recently rekindled as a result of the killings of Black males Trayvon Martin, Mike Brown, and Eric Garner.

Since the recent uproar in America, Black athletes have become more vocal and openly supportive of protests about racial issues in various sports. Five players from the NFL’s St. Louis Rams showed their support of the Black community by walking out on the field holding their hands up, symbolizing the powerful “hands up don’t shoot” stance. Several  athletes such as Derrick Rose, LeBron James, and Kobe Bryant wore “I Can’t Breathe” t-shirts during pre-game warm-ups to show their support for Eric Garner. The “I can’t breathe” t-shirts seemed to be the most popular way for Black athletes, as well as athletes of other races, to show their support at all levels including high school and college. 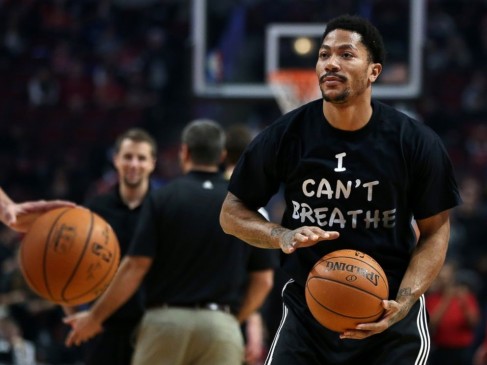 As speaking up and openly showing support has become more common among Black athletes over the last few years, the same is happening among athletes of other races. In fact, the mass support from professional athletes has been so great, that it is almost easier to find those who aren’t present during vigils and protests (Canadian-born Lakers center Robert Sacre did not wear the iconic t-shirt with the rest of his teammates before their game against the Sacramento Kings on December 9th).

Just five years ago, it was as if there was an unwritten rule against speaking out openly about controversial issues such as racism and domestic violence. Fortunately, after the Ray Rice incident, the NFL and other athletes addressed domestic violence, which caused several other celebrities to get involved with the No More campaign.

Not Civil Rights Leaders but Leaders

To be clear, I am not asking for Black athletes to be civil right leaders. I do, however, think minority athlete should support movements that work towards the advancement of their people. We see how they contribute to society through foundations and volunteering programs, but they have also shown in the past and as of late that they can be an important voice in raising awareness on social issues that have plagued the country for many years. Black athletes do not have to try to be the next Martin Luther King, Jr., or even Muhammad Ali for that matter, but they should be willing to at least openly support social movements that are important to them, just as they have done recently. Whether it is through funding, wearing a t-shirt to support an important cause, participating in demonstrations, or addressing racial issues in the media, Black athletes should be involved in any way they can. If they are willing to set a proactive example for their millions of admirers, they too will contribute to the advancement of this nation.