This Monday’s man crush is none other than the Spanish singer, Enrique Iglesias.

You might know him from his classic song ‘Hero’ or his recent hit ‘Bailando’. His songs makes everyone drop whatever they are doing and start dancing whether they know how to or not. I don’t blame them, I start dancing the minute I hear his songs no matter where I am (I’m sure my professors think I have gone mad).

I have been listening to his songs since I was a child, watching him rise in fame throughout the years. Though his recent songs are quite catchy, I really miss the Spanish ballads he used to sing back when he was barely starting his career, but I know that I can always catch them on YouTube when I’m feeling nostalgic. His songs have not only filled us with rhythm and passion, but have also brought cultures together. People around the world listen to his music despite not knowing Spanish, and in some cases English. Enrique tends to release popular songs both in Spanish and English, a way to not exclude either crowd. You don’t need to know either language to enjoy his music, so just let the music take hold of you and let go.

Aside from his music, may we take a minute to admire this man? Lets just say this sizzling Spanish native has many fans screaming for him. However, rather than pushing them away, Enrique invites his fans up on stage (or if they somehow managed to ninja themselves up there) and shares the love. 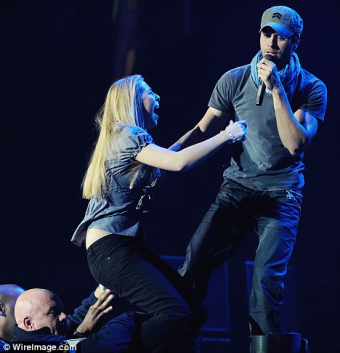 I’m currently obsessed with ‘Bailando’. it’s my “everything” song–when I do homework, bike, do laundry, walk to class, or anything else, it is always playing. If you haven’t heard this song, you better click the link below and let this beautiful man’s voluptuous vocals take you away. Meanwhile, I’ll keep waiting for Enrique to show up at my door. Marry me Enrique!